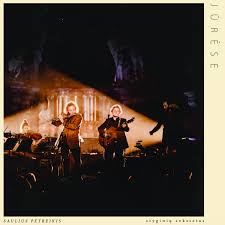 With its New Agey, Celtic feel, at times Jūrėse (meaning ‘In the Lagoon’, referencing his home region) sounds almost like a Clannad album, though given the historical links between Lithuania and Celtic countries, perhaps this should not surprise. And whilst Lithuanian folk music is clearly a forte, Saulius Petreikis’ interest in the traditional music of other countries is also evident.

Indeed Vilnius-based Petreikis, originally classical trumpet trained, nowadays plays more than fifteen wind instruments from around the world, from his own collection. Many of these can be heard on this album; a bonus would have been to have had a listing of these, sometimes unfamiliar, instruments, track by track. With nine previous solo albums and numerous collaborations behind him, on Jūrėse Petreikis is joined by a fine string sextet and also on guitar by his brother, Donatas Petreikis who also is co-composer, and with Jonas Jurkūnas, co-arranger.

At slow to moderate tempo, the simple, hummable melodies soothe. The playing is impeccable and it comes as no surprise that Petreikis composes also for theatre and screen. The lovely ‘Mamai’ (For Mum) being especially dramatic.

This is family-friendly, world, relaxation music at its best. It grows on the listener with every hearing.

We use cookies to ensure that we give you the best experience on our website. If you continue to use this site we will assume that you are happy with it.Ok