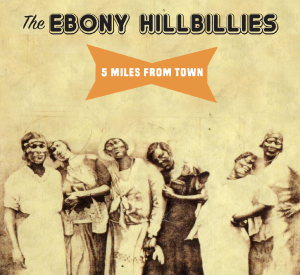 This fifth and latest release from spirited septet The Ebony Hillbillies (TEH), is a corker. Renowned and beloved for their particular take on “Hillbillie” music, leader, violinist and vocalist Henrique Prince and his colleagues once again successfully juxtapose cheerful, even celebratory jazz-informed American country and bluegrass music, mostly traditional pieces rearranged by TEH, with up to the moment, in-your-face social commentary.

The music throughout the album lightens the heart with its toe-tapping and danceable cheer, this reaching a pitch on instrumentals such as the title track, with its infectious pattering, stomping and slapping. Traditional instruments such as bones and washboard are prominent. Likewise, instrumentals “I’d Rather be A Nigga Than A Po’ White Man” and opener, “Hog-Eyed Man” with leaping violin and thumping rhythms evoke dance parties of years past.

However, a key part of TEH’s message are the lyrics. Those on “Another Man Done Gone/Hands Up Don’t Shoot” prove almost too hard to hear, but the repetitive, call and response structure gives no possibility of missing the unfolding, horrific narrative: “They shot him in his car… He said he couldn’t breathe…  He didn’t have a gun… They shot him anyway.”

Pulling the heart-strings in a more sentimental way are the lyrics of the lovely Bonnie Raitt song, the Scottish air-sounding “I Cann’t Make You Love Me”.

Though they may have started by playing on the streets of Manhattan, TEH have in recent years appeared in such august establishments as Carnegie Hall and the Lincoln Centre, New York City. Indeed 5 Miles From Town is an album which has an urban feel, yet also sounds as though it has sprung from the countryside. Similarly, if feels simultaneously old and very much of our time. Such originality, rawness and integrity deserve to be heard and surely can only benefit those who here it.

This website uses cookies to improve your experience while you navigate through the website. Out of these, the cookies that are categorized as necessary are stored on your browser as they are essential for the working of basic functionalities of the website. We also use third-party cookies that help us analyze and understand how you use this website. These cookies will be stored in your browser only with your consent. You also have the option to opt-out of these cookies. But opting out of some of these cookies may affect your browsing experience.
Necessary Always Enabled
Necessary cookies are absolutely essential for the website to function properly. This category only includes cookies that ensures basic functionalities and security features of the website. These cookies do not store any personal information.
Non-necessary
Any cookies that may not be particularly necessary for the website to function and is used specifically to collect user personal data via analytics, ads, other embedded contents are termed as non-necessary cookies. It is mandatory to procure user consent prior to running these cookies on your website.
SAVE & ACCEPT